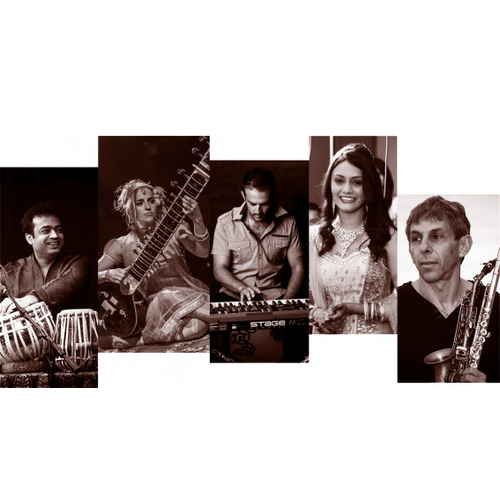 Talks covered by this speaker

Shanti Fire is the meeting of five seasoned musicians who bring their depth of experience in Indian classical, jazz, soul, kirtan, West African and flamenco to produce music that is unique, hypnotic and passionate.

Rosie Henshaw has lived and breathed music since the age of 9 when she started studying sitar, voice and dance while at boarding school in India. Once resettled in Australia she continued to study and perform with voice, sitar, guitar, bass and cajon, in classical Indian and Western contemporary styles, touring the country and the world with Old Man River, Ngaiire, The Bakery etc. In 2014 Rosie competed on The Voice Australia where she delivered three outstanding performances. Her debut album Rosie & The Bees was released that same year, with rave reviews.

Emanuel Lieberfreund is passionate about the power of music to open the heart to a sense of the sacred. He studied classical and jazz flute at the Sydney Conservatorium, and now plays flute, sax and percussion. Emanuel is best known for his contributions to jazz/world fusion, music for dance, and yogic devotional music. His world music ambience CD Atma's Sphere has been played on Radio National, Eastside Radio, Northside Radio and Soultraveller Radio.

Rucha Lange is a gifted Hindustani vocalist who studied singing from the age of thirteen with guru Shri Aniket Khandekar and her grandmother Smt. Malti Lange. Rucha's forte lies in her exquisite renditions of Indian classical raags, ghazals, devotional music and fine melodies that take audiences on a mystical musical adventure of the soul.

Byron Mark is a pianist, percussionist and composer who has established himself as an in-demand funk, flamenco, jazz, pop and classical performer in Australia and internationally. He trained in classical piano, and studied cajon in Spain and djembe in West Africa. Byron's latest performance concept is unique - where he plays keyboards and percussion simultaneously. Byron has recently released his debut album Amalgamation, featuring some of Sydney's finest.

Maharshi Raval is widely recognised as one of Australia's most skilful and versatile tabla players. He has been deeply immersed in Indian classical music since early childhood while still being open to other musical styles. He studied tabla with Pt Nandan Mehta and won first prize in the All India Youth Festival tabla competition. Since migrating to Australia he has played with such Indian classical masters as Pt Debiprasad Chaterjee, as well as bringing his tabla into jazz with Sandy Evans and flamenco with Chachy Penalver.

Your logo could go here!

If you'd like to get your brand in front of attendees following the categories this speaker is talking about (on this page, via email and during each talk) contact us.
We use cookies This website (and some of its third-party tools) use cookies. These are important as they allow us to deliver an exceptional experience whilst browsing the site.